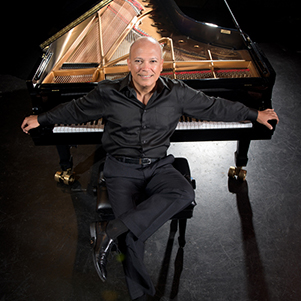 On August 3rd at 5pm, join us for a special piano concert by José Ramos Santana, one of the most acclaimed pianists of his generation. The acknowledged master of Spanish Music will be accompanied by Henry Hutchinson and Veronica Pellegrini on the violins, Doménico Hueso on the viola and Elisa Sabada on the cello showcasing music from Chopin, Albeniz, and Dvorak.

Jose Ramos Santana’s much lauded guest appearance with the American Composers Orchestra at Carnegie Hall during the Sonidos de las Americas Festival was described by critic Allan Kozinn of The New York Times as ” powerful…Mr. Ramos Santana played with virtuosity and precision”. This event marked his third Carnegie Hall performance in one year.